Raymond Dake joined the firm as an associate in 2013 and represents clients in employment litigation, including sex, age, race, and disability discrimination matters, whistleblowing, harassment and retaliation claims, and wage and hour class actions, as well as personal injury litigation, Workers’ Compensation disputes, and Social Security Disability matters. Mr. Dake is licensed to practice in Missouri state court, as well as the federal courts in the District of Kansas and the Western District of Missouri. Prior to joining Siro Smith Dickson PC, Mr. Dake gained an extensive background in civil litigation as a judicial law clerk for the Honorable Joel P. Fahnestock at the Jackson County Circuit Court (2010-11), and as a judicial law clerk for the Honorable James M. Smart Jr. at the Missouri Court of Appeals – Western District (2011-13). In addition, during law school, Mr. Dake worked as a law clerk for another area law firm specializing in plaintiff’s medical malpractice and product liability litigation and as a judicial intern for a federal judge in the Western District of Missouri. 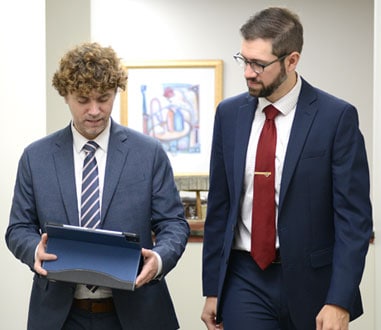